Would you like to switch to the accessible version of this site?

Don't need the accessible version of this site?

But you’ve probably experienced a gap between what’s promised and what’s delivered. Most dentists providing teeth whitening have been frustrated with a lack of predictability, effectiveness, and longevity of effect, as well as complaints of sensitivity by patients.

Intrinsic tooth color is a result of large natural pigment and stain molecules trapped within the microstructure of teeth. The larger these molecules are, the more chromophores they contain, and the darker the teeth appear.

All peroxide gels work by forming hydrogen peroxide as their end product. Hydrogen peroxide breaks down to water, oxygen, and numerous radicals and byproducts known as “bleaching factors” that lighten teeth.

Optimum whitening results are achieved only when these whitening gels are: fully potent; chemically influenced to produce a high percentage of free radicals (instead of simply oxygen and water); and are allowed extended time for these factors to diffuse thoroughly into the microstructure of teeth.

Clinical Research Associates (CRA) as well as other researchers have found that whitening gel in conventional whitening trays is only strongly active for 25-35 minutes. This is due to rapid contamination of the whitening gel by saliva.

Both saliva and sulcular fluid contain an abundance of the anti-oxidant enzyme peroxidase. When filling a set of upper and lower whitening trays with whitening gel, approximately 6.5mg of peroxide is placed in the trays. Saliva is capable of destroying a full 29mg of peroxide per minute! It takes very little contamination of the whitening gel in the trays by saliva to destroy whitening gel on contact.

KöR whitening KöR-Seal™ trays are specifically designed to seal both saliva and sulcular fluid out of the whitening trays. These trays, in combination with KöR Whitening’s continuously refrigerated Dual-Activated, Tri-Barrel™ Hydremide® Peroxide Technology provide 6 to 10 hours of whitening activity compared to the typical 25-35 minutes.

The result is a thorough cleansing of debris from between enamel rods, rejuvenating the enamel and delivering truly amazing whiteness. 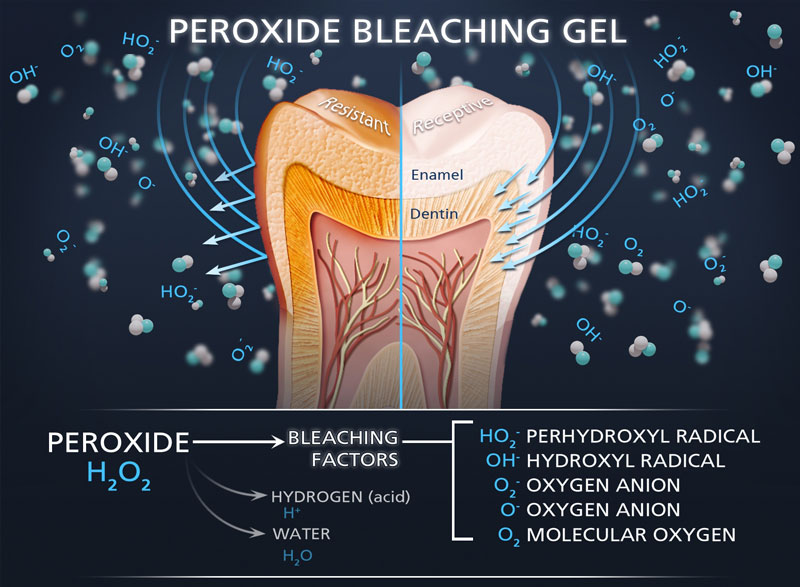 Send Us an Email

Find us on the map